As returning readers know, I had an early fascination of sorts with The Manson Family. This came from an article I read on them back in 1984. The first time I saw the name zero was in that article. So yea, that article had an impact on me. I’ve written about all this so I won’t repeat old posts (I would never do that). It is also known that I am a pretty big Beatles fan. This is due to many reason separate from Manson, The Family, or that article, but Manson and The Beatles were kind of connected in my teen and early adult life. This is primarily because of The White Album, which we’ll will get to shortly.

Rewind to 1979. I was just a kid, just beginning to find my own music. I saw the movie Sgt. Pepper’s Lonely Hearts Club Band. I loved that movie. I know, Bee Gees doing The Beatles in a corny movie, not the coolest way to get into The Beatles,  but this is how it happened. Besides my other favorite movie at the time was Grease. Makes sense, no?

Getting side tracked, I know, some things never change.

So a friend of mine’s older sister had a copy of The Beatles‘ Sgt. Pepper and played it for us. I still remember looking at the cover for the first time.

I didn’t know most of the people on it at the time so I didn’t study it too much. Definitely not like I would do later with my own copy. Then I opened the cover and looked at The Beatles in their bright uniforms just like from the movie (I know the movie was just like the album, this is just how I was seeing it then) I thought it was cool but it was not the big bang. That came when I saw the back cover..

I was sucked in. She played it from beginning to end and I read along beginning to end. This was the first time I had ever done that but is tradition now. All my favorite albums were first listened to this way.

I can picture the 3 of us sitting there in her bed room listing to it on her record player with such, what’s the word I want? Nostalgia? Well it definitely is a an easy memory to dig up.

The following year while staying at my grand-parents, I learned my aunt had Abbey Road on 8-track and that thing got played and played.

I fucking loved that album. These just happened to be the 2 albums where most if not all the songs from The Bee Gees‘ movie came from, but I was really hearing some of these songs for the first time… obviously.

It’s not like I had never heard The Beatles before 1979. Of course I had. On the radio or my parents playing them. That was kind of why I liked the movie so much. Seeing the characters in the songs brought to life was fun.

But as I said this was the time of me finding my own music, The Beatles was not that. The 80’s had kicked in and I was on a ride that would detour through new wave, punk, hip hop, and metal.

In 1984 my new-found interest in The Family brought The Beatles back into my life. Well with the help of Motley Crue.  Later that year  I got the Motley Crue picture disc for Helter Skelter.

Inside on the record sleeve was this: 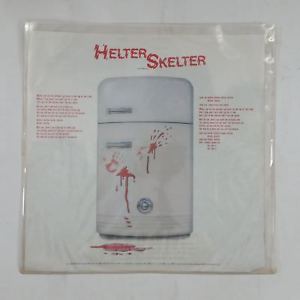 But this time there was more.

Now I had read the Manson family article but I did not know all the details of the murders, my mom filled me in. My mom was a little taken back by the picture of the bloody refrigerator. After explaining that The Family had written on the LaBinca’s fridge in blood my mom expressed how she thought Motley’s album sleeve was sick and disrespectful. I thought it was cool. We were both right.

There was no internet to chase back then, but I chased anyways. I talked to anyone I knew who knew about Manson’s fascination with The Beatles. Plus we had the library. My dad bought me The White Album on cassette and I wore it out.

What a master piece! Still one of my favorite albums long after my interest in The Family fizzled.

Back then though The White Album and Charlie Manson went hand in hand. I even had it playing while I read Helter Skelter. It helps set the mood.

From the idea that The Beatles were The four Horsemen from the bible speaking directly to Manson through their music to the idea that Helter Skelter was a call to war of the races that Charlie and his family would hide away from in the desert and return to rule over this end of times survivors. It’s just some freaky shit.

While reading in Helter Skelter about how Susan Atkins is the first to admit to The Families infamous murders to a cell mate while sitting in jail (at the time the family was only charged with some stolen vehicles) and started the whole investigation into Charlie and The Family connection to the murder cases (all separate at the time since cops had not relied Tate and LaBinca murders were related), I was listening to Sexy Sadie.

I think most people know Susan was known within the Manson family as Sadie Mae Glutz or Sexy Sadie. And the lyrics are:

Coincidence?  Of course. Don’t make it any less trippy.
After reading Manson In His Own Words, Charlie becomes a lot less of a big scary boogie man. Yes, Mansson tries to down play himself, but still you can see that there is a middle ground between the ultimate evil described in Helter Skelter and the average criminal some other accounts paint. You can see how most of the madness did not start to create some race war but over money Manson thought was owed to him by Gary Hinman. The Family was trying to scare Gary into paying up when he was killed. Family member Bobby Beausoleil was arrested for that murder. So the Tate/LaBinca killings were done and then staged to look like the same person responsible for the Hinman murder was still at large therefore forcing the release of Bobby Beusoeil.
Most people know all this and really it don’t have much to do with the topic of this post. I am just pointing out that as with most stories we all tell and hear, they are not always as real as we make them. Was Helter Skelter the story line that inspired The Family? Maybe. But they didn’t even get the spelling correct:

None of this is is needed to go into this post’s topic (I thought some of you might find it interesting though), because we have the internet!

No need to rely on my memories or those I got my stories from. If you want to know about the connection of Manson and The Beatles you can chase it on the web!

I suggest you start with this:

By the way, this post was actually began long ago and was meant to go up in the first year. So much was going on that it just got pushed aside and forgotten. It seemed to fit well with the previous posts so I sat down and got it out.

Hope some of you found it a fun read.